Sudokus are a phenomenon that fascinate people in every country. Gamers addicted to this puzzle type number in the millions. This may bewilder you if you are new to Sudokus. Continue reading, because in this book, we have a whole section explaining our reasoning/speculation of why Sudokus are addictive. This book is special in that the puzzles in it have been chosen using one criterion of addictiveness. Sudoku is a simple and beautiful game, and its rules are generally understood by most people. We are providing them here for the benefit of newbies who are encountering this puzzle type for the first time. This is what a typical Sudoku looks like: 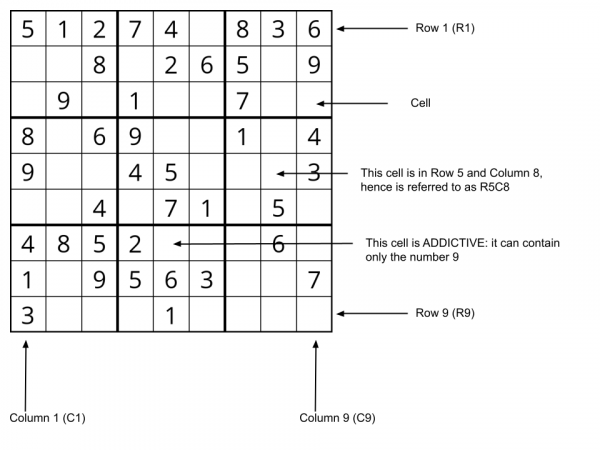 Columns: Columns are vertical lines, drawn from top to bottom, as shown above. The column on the extreme left is Column 1 (C1), and the one on the extreme right is Column 9 (C9). A standard Sudoku puzzle contains 9 columns, from C1 to C9.

Size: A Sudoku puzzle contains an equal number of rows and columns. A puzzle which has 9 rows and 9 columns (9 X 9), is said to have a size of 9, and has 81 cells or cells. The sudoku shown above is of size 9. This is the most common size; however, sudokus of size 4 and 16 are also popular with Sudoku lovers.

Given: Each Sudoku comes with several pre-filled cells. The pre-filled cells are called “givens”. The hardest Sudokus have the fewest “givens”. It is a fact that a 9 X 9 Sudoku needs a minimum of 17 givens to have a unique solution. The first book in this series, “Beginner Sudoku Brain Games,” contained puzzles with 45 givens. The next book, “Easy Sudoku Brain Games,” contained puzzles with 42 givens. Each puzzle in this book has 39 givens, which makes these puzzles considerably harder than the ones in the previous book.

Free cells: Cells that do not have “givens”, that is, they are empty at the start, are called “free cells”.

Goal / Rules: The goal of the puzzle is to fill in all the free cells in such a way that each row, column, and box contains one instance of each number from 1 to 9.

How to use this book:  You can draw the lines of the puzzle on an empty page and copy the givens of the Sudoku from the book to the page. Sudokus are different from other puzzles (such as mazes) in that you can very easily copy them to paper by hand. The advantage of doing this is that the puzzle on the book remains unsullied, and others can enjoy the puzzles too. Fun fact: after some time, you can try the puzzles again, and they will be like fresh new puzzles to you since you would have forgotten how you solved the puzzles previously. After you are done with all the puzzles, you can gift the book to a

friend or relative, who will then get the same thrill and excitement that you experienced earlier.